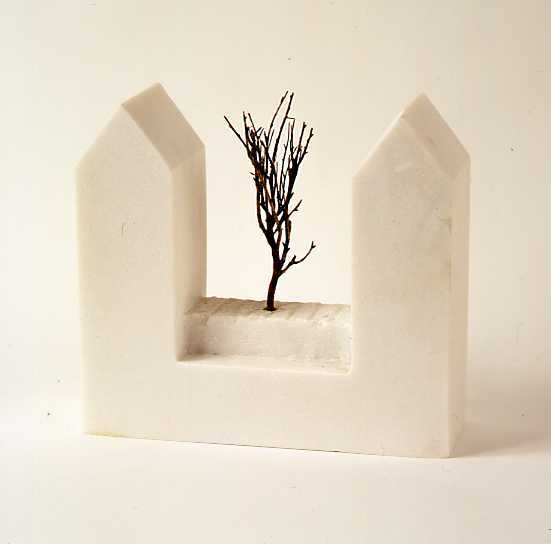 Although it seems obvious, you can’t start a text that talks about Carmen Baena’s work without making reference to the constant iconography that has accompanied it in recent years: the house. My first visit to her studio some time ago, in fact, came to my mind constantly as I wrote these lines. This grenadine, whose birth in a cave is not a mere anecdote, had then some sculptures of organic character and of very fragile appearance that simulated rooms “hung” on top; they were nomadic, precarious dwellings, sustained by some weak varetas that, on occasions and always following the deceitful channels of my memory, made balances on wheels.

The lightness of this work contrasts sharply with the current work he has titled Arbóreo. In every creative evolution there are differential elements that highlight the passage of time and the new paths chosen, elements that coexist with arguments that, like a pose, continue to appear persistently. This constant element, which is not recognisable to us – a certain “aroma” as Eduardo Chillida would have said – can be programmatic, discursive or an obsession that functions as a lever. It is not possible to fix paths to creativity. But there is also matter. The Renaissance painters knew this well when their brushes were dipped in oil. And it is that the techniques produce discourses…the materials too.

In this work by Carmen Baena, as I believe I see, the ingredients that I have cited in a somewhat sketchy and hasty way are combined. An element, in this iconographic case, runs through his work; it is rather an ideogram, that of the house, which is accompanied by other, equally cultural conventions that express an idea: that of nature[1]. However, the use of other ingredients in the materialization of these forms, of these images, endows them with radically different contents to their previous series. Matter is taken to the degree of meaning – there is no form or matter that lacks several at once, there is no form or matter empty of sin – and in this case Carmen Baena handles a matter that is offered so historically loaded: marble. The choice of this stone by the artist was a question that, starting from a tactile memory that appeared spontaneously, caught my attention and I shared with her in her studio.

With a few interesting exceptions, in this series it maintains its tendency towards verticality[2], however, in contrast to the previous fragility, marble gives it solidity, the saturation of an empirically experienced weight, thus producing a tension between the gravity of matter and the lightness of discourse[3]; a tension that seems to want to dilate the nature of matter and that has a long tradition of rupture in contemporary art – think of Constantin Brancusi, Barbara Hepworth or the aforementioned Eduardo Chillida – and although it has not been found in the mainstream of the creative manifestations of the last thirty years, more given to the choice of ultralight materials and a sculpture “in the expanded field” – Krauss dixit – it has exceptional interdisciplinary examples in the cases of Louise Bourgeois or Giuseppe Pennone.[4]

Carmen Baena’s houses are still on something, but in this case they are aerial marble roots worked in a coarse way, like the capital on a Romanesque column that combines the monstrous, the fantastic, nature and culture; they rise on trees drawn with acid in the stone, fossils as solid foundations. A house that, on other occasions, remains in the interior of an architecture of archaic aroma – like an inverted stepped pyramid of the old Mayan culture – and that, in others, appears hanging from a vertical surface, the wall, in a reading that, more than leading us to weightlessness, endows the piece with the secure sensation of hanging, of suspension.

This leads me to another of the questions that these sculptures also immediately seem to reveal: the expression of the idea of spirituality, of a non-denominational meditation, alien to a specific religion. These heavy yet light houses, elevated or hung and crossed by branches, with poetic echoes of Laugier’s hut, suggest to me a stability and protection that appear in the bastions of the medieval abbeys, in the intricate isolation of the Zen monasteries, in the buried secret of the Mayan pyramids, in the caves of the hermits, in the columns of the stylistic saints, in that beneficent forest and protection from the demiurges. Miniaturized and metaphorical spaces, those of Carmen Baena, which create a new tension, that of the full in the hollow. They speak of a solitude and a voluntary retreat that pushes contemplation and to find oneself in the void. This option is given, common to other authors such as James Lee Byars, Mona Hatoum. Antoni Tápies, Voth, Josep Ginestar or Wolfgang Laib do not renounce in contemporaneity to the shaping of a spiritual art alien to the preconceived, ruled and consensual rites. Artistic manifestations that are the reflection of empathy with the other, with nature and with a renewed idea of mystery.

When Carmen brought up these questions, she spoke of the importance that Gastón Bachelard had had in the construction of his images. Bachelard, in his book The Poetics of Space, focused his reflections precisely on the house as a “happy and beloved space” that protects from “adverse forces”; a discourse that, from a secular perspective, fused the influences of the imaginary in Jung with the elaboration of poetic figures of space. The French thinker affirmed that “the being that hides, the being that focuses on its shell, prepares an exit… the most dynamic evasions are carried out from being compressed”[5], which has been interpreted in Carmen Baena’s work as a metaphor of the house” as a second skin”. An epidermis that shelters meat and meat that is kept in the air or away from the ground by something foreign to itself, rather than being weightless or light per se.

And this concept tries to be materialized with the minimum possible elements, with ideograms that restrict the idea at the same time that they universalize it by consensus and that curdle among themselves, by work of this craftswoman, as in a natural way. Different referents, some from the field of nature, others from culture, that become something that, thanks to the expressive possibilities of the poetic image, can continue to be all those referents at the same time.

2] Some of the pieces that are hung are of horizontal format, nevertheless the vertical one is constructed with the height. Different is the case of some perforated and cubic marbles that keep the image of the house – Livela -or a tree -Axis mundi- in its interior; the reading is also different in two other narrative pieces in which an idea of a more descriptive landscape is formulated. A place in the world and Arborecer.

3] In the sculptures of paraffin, graphite or wood, Casa de lluvia of which there are some in this exhibition, there is nevertheless a parallel discourse between matter and lightness.

[4] . In the case of this Italian artist he has a series of marbles realized in 2000, Anatomías, in which he identifies the veins of the stone with the veins of the blood system giving the sensation of a matter that palpitates and, therefore, an anthropomorphic value.