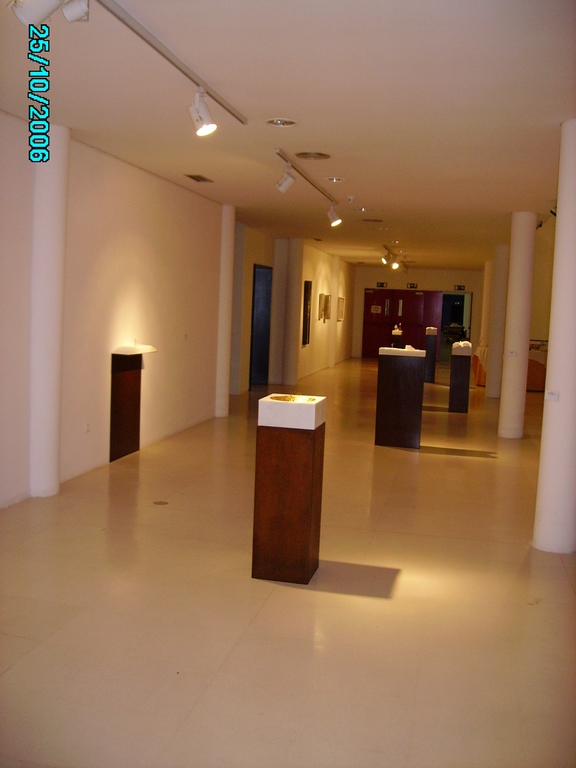 “The places we live, and frequent never
will disappear completely, we leave them without leaving them.”

Created from the roots of the air, from that subtle and intuitive breath that allows us to feel and be, Carmen Baena’s sculptures invoke, in a balanced and harmonious way, the basic forms and functions of nature. They return us to all those inhabited places that, as George Perec says, we never abandon.

Their pieces constitute compact spaces in which materials of natural and artificial origin coexist, and in which a hermetic and concise language is used that offers the artist the necessary psychic depth, to develop a reflection around the memory, time and the essential problems of man. In spite of the apparent coldness and serenity of the strokes and materials with which he sculpts and models, they assure him a fact of capital importance both in the process and in the creative result: the primacy of the senses and of the most basic instincts.

In this way, the fragility apparent in many of her works is transformed into extraordinary rotundity and solidity, more typical of the Romanesque style, as already mentioned in the catalogue Arbóreo, Isabel Tejeda, than of certain current excesses.

Carmen Baena approaches her work from a language of contrasts or paradoxes. These contradictions are systematic and significant.
The first system is composed of two coordinates: the straight line and the curve. The meaning it gives to each of the coordinates is that of a straight line or edge as a human elaboration and that of the curve as an elaboration of nature.

The second system is made up of colour coordinates. On the one hand, white and black appear, the duality of our own existence. The predominant white through the use of marble represents serenity and purity, opposes the black that represents the shadows, but also complements it because black denies earthly life.
In addition, on other occasions it appears, the brown colour of wood and polyester is shown, whose wide chromatic range symbolises mother earth, the body, the home, intimacy and the ideal security of the family cell. This tone faces the gold that symbolizes energy, power, life and the divine.
The balance between all these nuances and the perfect symbiosis produces light-filled sculptures, temples charged with nuances.

But perhaps the essential feature of carmen Baena’s sculpture is the iconographic repertoire that floods his entire work. These are elements that are repeated insistently and almost obsessively: the house, the landscape and the tree.

The house: a place of habitation and protection.

The house, even more than the landscape, is a state of mind.

The American sculptor David Hammons tells us that art is a way of preventing the outside world from harming us, of keeping negative energy away. In the same way, Carmen Baena’s pieces, dominated by the central figure of the house, seem to underline the idea of protection that art can offer us. Also the conception of the house in Gaston Bachelard, thinker read and analyzed by Carmen Baena, is intimately linked to images of protection and psychological integrity. For him, moreover, the house acts as a powerful symbolic spring and as one of the greatest powers of integration for man’s thoughts, memories and dreams.

The house is, therefore, the place on which Carmen Baena’s imaginary is based. Its closed structure and the space that surrounds it become an intimate reference of the author. The home is also a feminine symbol, so a wider reading of this element is possible, an articulated reading according to the feminine imaginary and the specificities of its position as a creative subject. The house, as the symbolist poet Juan Eduardo Cirlot would say, is transformed into a body, and Carmen Baena as the pre-Hellenic goddess Hestia becomes the abstraction of the home.

As a fundamental consequence of the creation of this introspective language, external action is replaced by interiorization. Carmen produces houses without windows, without a solution of continuity between an exterior and an interior, without possible contamination by disturbing external agents.

Their houses are compact spaces, brief poems, legible and delicate, that like haikus enclose in a fine horizon of images the extraordinary depth of existence.

My house has no doors,

Rain on the cliff

The landscape: the miniaturiazación of the whole.

As it happens in the Japanese art of bonsai, Carmen recreates the immensity of the world in a small space. The process of miniaturization, to which landscape and expressive means are submitted, allows the author to concentrate in a simple image subjects of deep meaning: time and memory are stopped in the geometry of the stone.

The natural landscape inspires and leads us to the serenity of meditation. But in this landscape the house reappears, therefore it is a nature intervened by man. Human creation tries to equate itself with the creation of Nature in its calm and serenity, in its retreat into the interior of houses surrounded by hard rock, blind houses.

In La poética del espacio Bachelard, he establishes absolute contrasts that oppose the “immense vastness” of the outdoors to the “closed universe” of the house. Faced with the outdoors that is full exteriority, the house would be centric intimacy. Faced with the disorienting confusion of the elements, the house would always be understandable space. Faced with the endless horizontality or amorphous spatiality of the elements, the house would always be vertical and central territory. For this reason, the symbols used by Carmen, tree and house above all, take us back to a mythical stage of humanity and knowledge, a stage in which the artists were magicians who protected and cared for us.

The center of the house

The tree: axis and stake.

Silence…, the Earth is going to give birth to a tree.
Vicente Huidobro.

Silence and serenity, the tree spirit breaks the marble, dies the coagulated metal in the earth, ascends regenerates. The tree, understood as the axis of the world and as a temple dedicated to life, could be a metaphor for the union between nature and man, the landscape and the house. But the fact that Carmen places her birth in the infertile rock significantly modifies this natural symbolism and has a clear disturbing effect.

The aesthetic experience wounded by this imaginary stake brings us back to the pain of creation, to the abyss of existence.

And you always find the sound of time

between the branches of a pale forest,