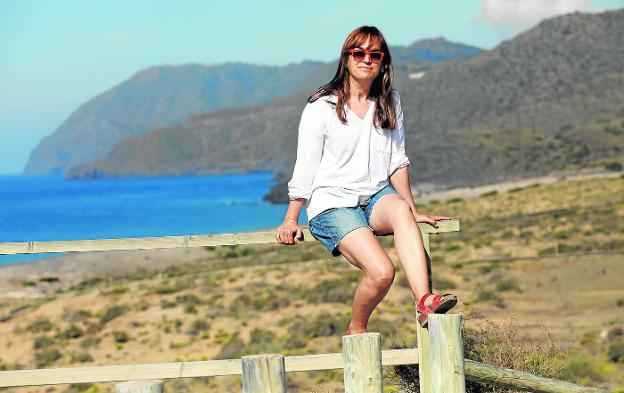 The plastic artist Carmen Baena (Belerda de Guadix, 1967), both sculpting iron and marble, as well as collage weaving landscapes, has in nature one of her main sources of inspiration. One only has to see her mountains of white marble, the trees that populate his peaceful settings, those that accompany her characteristic houses; the sowings that she now weaves on paper to give life to her colorful fields; the plants that take root in his landscapes of the soul…

Does nature inspire your work?

For example, the work I exhibited in ‘Arte Soterrado’ was born after a walk between Calblanque and Cala Reona. I have lived my childhood very much in contact with nature. I had not left Belerda de Guadix until I was almost 11 years old: I drank water from fountains (without a tap), I was with my goats, chickens, rabbits, dogs, cats; with my father tilling the land, threshing the wheat and keeping the straw in the summer, which we threw at ourselves and stung what was a barbarity. When I say contact, I mean real contact. And living in a cave.

Behavior with the planet: “I don’t understand how interests always can; we should be in the street every day”.

A cave, a cave. A cave-house, come on, but at that moment there was nothing to do with it. With the view of Sierra Nevada from there. In other words, I have in my mind the white of the mountains, the yellow of the wheat of the plains in summer, to look at the horizon and see it 360 degrees. And my work, everything I do, comes from there.

What does it intend to transmit?

Do we do enough?

Future: “I am an optimist, there are a lot of people with very good ideas and good intentions, and we can change things”.

What do you think is the main problem facing the planet?

Pollution, climate change, dumping plastic… I recently heard that they are going to ban it and… If they have to take action. Also when they said that smoking would not be allowed in public spaces, we all thought that it would be impossible and it has been possible. We can get used to another way of doing things, politicians simply have to be there making laws that others can comply with.

What do you personally do to contribute to a better planet?

I recycle everything: plastic, cardboard, glass,… I’m separating everything. There are people who say to me: ‘Why separate, if then they put everything together in the dump’. But how can that be true? It seems there was a time they were doing it, but I want to think it was very early on. I don’t leave anything lying around in the mountains either, it makes me hysterical to see it around (I don’t understand how some people leave garbage); and I try to be as respectful as possible with the environment. And I educate my children, because they are the future, so that they do it well. The truth is, they are already bothered to see something on the ground. We also have five tanks to collect rainwater and water the plants in the garden.

Pepe and I have friends in Germany and we’ve been going there for many years. There, they told us that they even have to pay a tax if they exceed the amount of garbage generated. We saw how they recycled everything; how they bought ecological products… That’s why I also started buying organic products many years ago, although 12 or 13 years ago there were very few places to find them. Now, Del Bancal a Casa cultivates in El Esparragal and sells even in the markets; there are already many places, at the Molina gas station they sell products that they grow behind Los Conejos. There are more and more people and that’s also taking care of the environment: fewer chemicals are added to the land and water.

Why do we have less ecological awareness in Spain?

I don’t know, because people think about what’s inside their house, and they think what’s outside doesn’t affect them. They don’t realise that they do, that we are part of something global and we can’t escape. They don’t realise until they get the rubbish at the door, although sometimes it comes to us.

And when the ban on throwaway plastics is in force…

Yesterday, precisely, I was thinking about it. I’m going to buy a wicker basket, like the one that my friend Martina – German – has had for many years to buy.

And the disposable cutlery?

I don’t use them. It’s a shame; you use it for a moment and throw it away right away.

But the use and throw away is in the DNA of today’s society.

Yes, but even clothes have to be recycled. The other Saturday I was at the Vistabella market and I bought a few things. That’s great. When I have things I’m not going to wear or they don’t come, I try to pass them on to someone. But it’s true that, in the stores, the summer and winter seasons have gone by. Now they bring new clothes every week.

All this, does it fit today?

It doesn’t fit, but the world is moving in other directions. The world and the economy have always been changing and it is clear that with this system we cannot continue. Plastics, landfills,… And what about technological garbage? It is clear that we have to change. As with renewable energy (it seems that it is close), and solar, I do not understand why it is so expensive to install or do not give facilities. We asked for a budget to install solar panels, but it was very expensive and not viable; and that was when they still gave subsidies. They should give facilities, but there’s the issue of interests again. One day or another this is going to change. What we don’t know is if it will be too late, and we will have to leave the planet, or there will still be a solution.

Yes, what world awaits them?

And how do you see your generation?

“Calblanque is one of the most beautiful spots in the region, where I come into contact with nature, and is the first beach I visited and bathed in when I came to Murcia. In addition, I came with Vicente Blanes, total ecologist and a very good person. It’s one of the beautiful memories I have when I look back”, reflects Carmen Baena, from Granada who has lived in Molina for decades. “We stopped coming when my children were small, because it was more difficult to get there with the cars, but now they are older and we are recovering it,” she admits. And she adds that, “for me, there is no bathroom like the one you can have here. A couple of years ago I came one morning and there was nobody there, it was like feeling part of nature. I had that feeling.